This is going to be a long one.

Blue was one of those once in a lifetime dogs. When I joined the pack in 2008, Cobey had the
"Original Gangsters:" Kona, Blue and Tensaw. I was instantly drawn to Blue. She was regal,
independent, wild, and beautiful. She didn't need anyone but she choose to grace us with her
presence.

Cobey got Blue because she was a runaway. A very typical Siberian husky behavior. People are
not usually prepared for the heartache and stress they can cause. At the time, Cobey lived in
Missoula with Kona. He often took her to Dog Logic Doggy Daycare but on this particular day he
had not. He received a call from Dog Logic informing him they found Kona wandering outside. When
he got to the daycare he was surprised to find an amazing look-a-like. He told them he would find
her owners and he took her home. Eventually he found them and they asked if he wanted her, they
couldn't handle all her wandering ways. And she was with us ever since.

She got the name Blue because of hte Blue collar she was wearing when Cobey rescued her. It started
as "dog with the blue collar" and then "Blue" stuck. In the "early days" we often refered to her as "two."
Kona was "one" (the first dog), Blue was "two" (the second dog) and Tensaw was "ten" (for obvious
reasons). "One two and ten!" was what we'd say.

Blue and Kona were quite the pair. They had a close bond. For some time they thought their name
was Konaandblue. They often were found laying mirror image to each other.

When Kona passed in 2016, it was hard on Blue. She was quite visibly affected by it. But she made
it through and became best friends with the barn cat Priscilla. It was an unlikely friendship for a husky.
Every morning, Priscilla would wait for Blue to come outside. Together they would walk around the
yard, making it down to the end of the drive each morning to see the boys on to the school bus.

Blue has lived in many places around Montana (Troy, Missoula, Hamilton, Corvallis) and even in
Tok, Alaska for a stint. She almost did not join Kona, Tensaw and Cobey on that adventure. Cobey
offered for Blue to stay with me in Hamilton when he moved. I couldn't separate her from the pack.
She had a grand time in Alaska, even getting the chance to chase a whole herd of caribou.

There were many times we lost Blue to the allure of 4-legged, sweet smelling, running animals.
The original gangsters went on many leash-free hikes. While 90% of the time we were able to keep
them with us, sometimes the drive of the Siberian was just too overwhelming.

When we moved to Hamilton we started to get into dog sledding. Cobey already had half harnesses
for the original gangsters and had them trained to pull him on his longboard. The first season we went
sledding, it was just the three dogs and Blue was the lead dog. She was a strong, capable, athletic dog.
The next season she retired herself, at the top of her game ;) While she was never a part of our main
racing team, she will always be known as our first lead dog.

Blue was very special to me. So much so, she got a coveted spot in our wedding. She pulled the

ring-bearer down the isle. 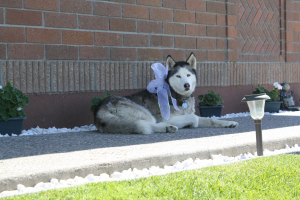 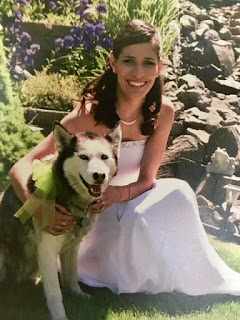 You will be missed and always remembered. You're my lead dog, Blue!

Posted by Brandi Williamson at 10:10 AM No comments: